The Place of Father in the Order of Creation

I like to fasten on a topic and shake it until it reveals everything in it. So this little trip today is about the creation of father’s day if you keep pushing back to it’s first origin – the creation of man.

Well now, there is one more thing about fathers before that. The first father, in our universe at least, was created when God organized his first child, but that was a spiritual thing. We don’t know much about that except that it would have made him a father, so I’m going to just leave that there on the table. We do know that he frequently refers to himself as our father, and he directs us to call him “father”,1 so we do have that. 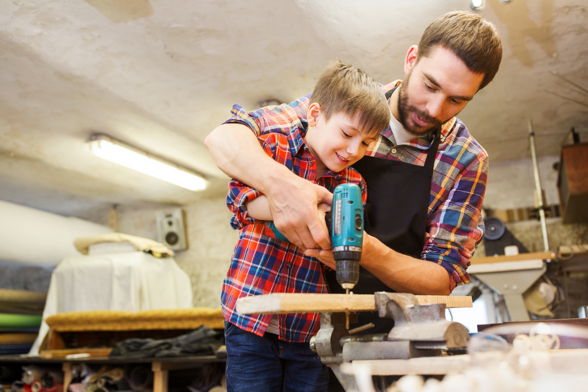 A lot can be learned from just looking at things and thinking about them. Look at the order of the creation on this planet. It had to be done in a certain order for it to work: sunlight for energy and temperature, rotating planet for sleep time, for temperature control, and for the creation of weather to carry seeds and water around. You have to have dirt before you plant anything, and the plants have to be there to feed the animals. And you have to have all that to support the higher animals, of which man seems to be a part.

So, if we focus in closer, we find the Bible saying that man was next to the last creation and then the  woman just naturally came to the very top of the resource “food chain”. She needed everything else in place so she could do her job, fulfill her mission as mother. And that included the man upon whose shoulders she would stand.

Well, that’s mother’s day getting created. And that’s why it is a much bigger holiday than father’s day. But we’re thinking about fathers here.

The Thing About Fathers

There’s this obvious fact that the woman needs a man in order to become a mother and that makes him a father. But he has a much larger role to play here. She needs safety, security and provisioning in order to do her job, and that’s the job of the father: set up a sturdy nest, keep the wolves away and bring home the bacon.

[edsanimate_end]It has always intrigued me that father’s just naturally do this and they love it, they thrive on this role. It makes them feel far more than adequate. It makes a man feel manly. Men who think just having intimate fun with women is fulfilling, they have their brains in their pants and that robs them of the broad richness that life as a father and husband offers. My wife and I decided on eight children before we married, and I have never regretted that decision. It has been the most challenging and therefore most rewarding part of my life. But back to the father thing.

It seems like we do a lot of things because of instinct. Girls love dolls and cuddling and babies; and boys love cars and physically challenging, even dangerous stuff. We raised six sons and used to joke about how you have to let them do more and more dangerous things in order to keep their interest. They feel the need to deal with danger. They love to build things and when possible to blow them up. They love guns and wrestling and have a natural desire to be the toughest and the fastest and, well, you name it: natural born protectors.

It’s no coincidence that boys like all those things. Watching brothers grow up was like watching kittens play rough and tumble. It’s instinctive training and as long as no one got really hurt in any way, it was all good. Now we keep watching them as they become fathers and have to deal with life’s complexities and sometimes with their own defeat under life’s pressures. And we see them sometimes renew their ancient, childhood pecking order, and we marvel how, in spite of all those things and a million more, they are still brothers. The miracle is really plainly seen when there is a falling out among them and they work to put it all back together. That’s love!

Now as men guys, when we grow up, we just naturally want a woman by our side and we want to be everything for her and if we are crazy in love with her, we hope we are good enough to be her companion.

Oh yes: there’s that “love” thing. That really puts the fatherhood in fathers. There is nothing more satisfying to a father than bringing home the food (or the money to buy it) and watching his wife and children eat it. It’s an instinct that we share with the wild critters who do the same in many cases. So how did this all come to be? I think a lot of it is what we want to call instinct, but it just might be a lot more than that. Maybe we remember things, without knowing it, from before we were born.2

And Be “The Rock”

One of the really big things with men in general, and with fathers and husbands even more so, is the built-in desire to be that anchor in the storm. It’s what makes a father say, “It’s going to be alright!” even while he has no idea how to make that happen. He just knows instinctively that that’s his job and he’s gotta do it – somehow.

But, like all good things, there is a price he pays for being the “rock”. He just doesn’t change easily. Well how can you be a rock and be changeable? It slows us down on that repentance thing.

I used to enjoy watching “The Red Green Show”, a man’s sitcom in the “Possum Lodge” in Canada. At the end of most shows, there was a scene repeated when the credits started rolling. A bunch of men would gather in a room and Red Green, the principle character, would lead them in a recitation that went like this, “I am a man, but I can change … if I have to.” I could always feel the truth of the inferences there and recognized that that was a real “man thing”.

So What is a Father Anyway?

I believe that a man is a “chip off the old block”, a son of the Father and that he put all those instinctive desires into us so we would find the greatest joy in serving, protecting and providing for the woman and the children she bears us. Those of us who get distracted by other ideas, they lose out on a lot of happiness. They lose out on real joy!

It’s all a part of the covenants of the Father – the ones he made with his sons before he sent us down here to figure this all out.2

How Father’s Day Became an Official US Holiday

Some of you maybe thought this was about how this holiday came to be. So not to disappoint you —

“The celebration of Father’s day was first inaugurated in the early twentieth century to complement Mother’s Day in celebrating fatherhood. To be more specific the first observance of Father’s day took place in Fairmont, West Virginia on July 5 1908. This celebration was organized by Mrs. Grace Golden Clayton. She decided to throw this celebration for the lives of 210 fathers who were lost in the Monongah mining disaster several months prior. But unfortunately since West Virginia didn’t officially register the holiday, most recognize the first Father’s Day celebration being held in Spokane, Washington on June 19, 1910. This celebration was organized by Sonora Smart Dodd, who was raised by her father who was widowed after his wife died. A bill to accord national recognition of the holiday was introduced in Congress in 1913. In 1916 President Woodrow Wilson went to Spokane to speak in a Father’s Day celebration and wanted to make it official, but Congress resisted. In 1957 Maine Senator Margaret Chase Smith wrote a proposal accusing Congress of ignoring fathers for 40 years while honoring mothers. In 1996, President Lyndon B. Johnson issued the first presidential proclamation honoring father, designating the third Sunday in June as Father’s day. Six years later Father’s Day was made a permanent national holiday.” Attribution: the previous paragraph is quoted from https://www.surfnetkids.com/fathersday/179/how-to-spell-fathers-day/.

1Matthew 6:9, “After this manner therefore pray ye: Our Father …”

1 thought on “The Creation and Fathers’ Day”