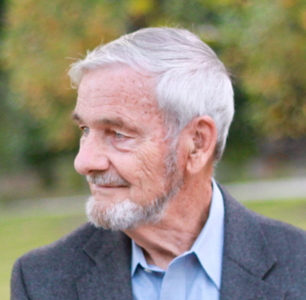 Jackson Pemberton is the youngest son of Stanley and Velva Pemberton who taught him (me) in all the good ways of life and encouraged me to try any worthy thing that came to mind.

Over a half century ago, one of my instructors in the MBA program at BYU made an observation about me that over the years I have recognized as true. He said, “At your best you can be extremely good – you have insight that is unusual and an ability to verbalize your gropings for even greater understanding.”

People will wonder why I think I can, with almost no legal training, presume to write about freedom of religion. I certainly cannot write about those issues in the typical manner, and that is just the point. Because I have not been steeped in the paradigms of the ancient legal profession, I can ferret out fundamentals hidden from those who have been trained in the craft. If there is any genius in my work, and a few people hold that opinion (besides myself), it is due to that fact.

I know that I have that gift for searching out fundamental meanings, for analyzing situations and then for verbalizing root causes and their active components. This became clear while I was studying land law as part of my degree in land surveying. Halfway through the course I thought I could see some very universal principles and wrote a short article laying them out in the form of axioms and corollaries. It was published in the Utah State Council of Land Surveyors magazine Focus.  It soon came to the attention of similar publications across the US and was republished in Nevada, Iowa, California, Minnesota, and Georgia. Encouraged by that unexpected result, I submitted it to Gerald McGray, Editor of the Professional Surveyor magazine who responded thus: “I have perused your essay and find it compelling. I would like to use it right away.”. Under date of June 10, 2004, I received a letter from a surveying manager at Moreland Altoelli Associates of Norcross, Georgia, that read in part: “I have read your article, which was published in the Georgia Land Surveyor. I would like to commend you for your deep and thorough understanding of the problems in the land surveying profession, your excellent examples and your candid language.” My credentials for writing these articles was 6 credit hours in land law.

My hope is to use this gift of insights in the service of my fellow beings – to help us all to better discern between right and wrong and good and evil. I will focus on the nature of man and his universe and thus on the political and religious forces that are determining our present state of affairs in the world. My perspective will typically be in a wholly secular context for that is the assignment I have accepted — to show that man has inherent and inalienable rights without any appeal to their origin in deity, and then to illustrate the effects of that fact upon the basis of the issues of the day. 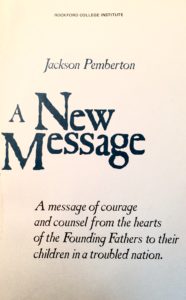 When I wrote the A New Message series for the Foundation for Economic Education’s Freeman magazine, I received a note from John Howard,  then President of the Rockford College Institute: “I think this commentary will do more to stimulate thinking about our nation’s founding than any other Bicentennial writing I have seen.”

A few years later he asked for permission to republish the series in booklet form. I agreed for a nickel a word and the Institute printed a few thousand booklets like the one pictured here. There are still a few copies of this floating around on Amazon.

A Bit of Auto-Biography

I was raised among orchards and farm animals: chickens, pigs, cows and a horse. My parents were Presbyterians and Republicans, both of which I had to take apart piece by piece before I could be content with them. I did most of that while attending three years at Washington State College (WSC, now WSU) in Pullman, Washington State. While there, I majored in Physics and Mathematics, finishing those with honors at BYU in 1963. I stayed on and graduated in the top quarter of my class with an MBA.

At WSC I took classes in logic, religion and philosophy. I actually majored first in Electrical Engineering but those studies were too superficial for me, I wanted to understand how the engineering equations were derived. So I changed my major to Physics and Math. While there, I discovered that the Church of Jesus Christ of Latter-day Saints had all the answers to my hundreds of questions about life and our universe. Finding no satisfactory reason to stay out, I joined in January, 1957. A year later I was overcome by the desire to share what I had found and offered to serve as a missionary, which I did from October 1958 to May 1961. My mission field was Sweden.

I married Charlet, a wonderful, smart, perky red head in 1961, and we decided to have eight children. We thought good citizens would be our best legacy to give the world. We had the eight then adopted two more and at the time of this writing we are raising a couple wonderful, talented and obedient grandchildren. So with that dozen we have observed nearly two hundred years of child maturation. Over the years we have also taken in others who just needed a place to live for a while. One was a recovering drug addict who proved that hard-core addiction can be overcome. It was a joy to have them under our roof.

My chosen career was computer systems design and programming with a few years of electronic engineering in the middle.

With all those children to raise, I was constantly looking to improve my income which took us to Utah, Arizona and California. I did OK, earned a million dollars and spent it all on my wife and children. My articles on the Constitution for our nation’s bicentennial came to the attention of the founder of Liberty Village in Flemington, New Jersey were I served as Executive Director for a year.

Our self-inflicted “poverty” gave us little choice for family vacations other than hiking and back packing, which we often did. Our favorite was a two week, 65-mile trek to the top of Mt. Whitney in the High Sierras of California.

In the late 1990’s, we lived a mile from the Pacific in Copalis Beach, Washington where I wrought computer software for Timberland Bank and Charlet did wetlands delineations on the Ocean Shores sand spit. I envied her work – half of her time was field work and half brain work. So a few years later I took a degree in Land Surveying from Salt Lake Community College and earned a 3.97 gpa. I worked for a while as a chain man and earned enough to pay for that degree. I loved the work! It was both mentally and physically challenging.

We both “retired” on May 27, 2005, and headed for Alaska with our 30 foot Airstream where we fell into a position with Alaska State Parks living in a cabin on Redshirt Lake northwest of Anchorage. We had to backpack our laundry and groceries three miles every week and hike out to church services each Sunday. Our job was servicing four rental cabins on the lake. We especially enjoying fixing and painting them, neither of which we were expected to do – we just liked doing.

My wife Charlet has been a treasure, a joy and a constant stimulus to keep me active, which I have deeply appreciated. We recently completed a major remodel of the 1937 house we call home – finishing the basement, adding a complete summer kitchen and bath there and a half bath on the attic level between two bedrooms, replacing all the plumbing and 95% of the electrical system. The year 2021 finds us in Independence, Kansas doing a restoration of a 1905, two-story brick home.

We have served almost five years as church service missionary companions in Feltwell, England; Annapolis, California and in Sanpete County, Utah. The first two missions were devoted to maintenance of houses and buildings and youth camps. The first camp gave me the opportunity to develop my architectural skills in designing and building three cabins. The second one saw us buying and operating a sawmill that we used to convert three large, old redwood trees into thousands of board feet of lumber. The lumber was used to maintain buildings and the amphitheater and to construct a much-needed wood shed that I designed and built.

Now I’m writing again. My goal is help bring peace between the left and the right. Their conflict seems centered on religion so church and state is a focal point. Jefferson’s wall has not worked. It has, in fact, constructed a false dichotomy, which explains why there is no progress in this struggle. In fact, because it is universally accepted it is creating a de facto state-supported and enforced religion.