There were a lot of rocks in the first cavern of the cave of rights, and we have discussed the rights of those rocks. Today we’re moving into the lesser life forms cavern to see the hierarchy of rights found throughout nature. Then we’ll tour the next cavern and discuss rights in conflict. I have a funny story to tell you in there; something that happened to me on my tractor years ago.

Last of all, we’ll go down the steps of trouble to the cavern below the church room and the state room. That’s where the roots of the church and state controversy hang from the ceiling in plain sight.

So as we leave the rocks room, remember from now on, when you look at a rock, you are looking at rights. We humans also have rights to take up space and to be heavy. Some of us more than others. But let’s explore the rights of lesser life forms for a minute. We can learn a lot about human rights from these simpler things.

A tree, like a rock, has property rights to its space. But it also has rights to use sunlight, water, air, and soil. It is a rightful consumer of those resources.

A tree also has the right to split rocks, to restrain the wind and make a mess on the ground with its waste. We need to understand that if we want a tree to realize its full potential, we have to honor those rights and treat them as sacred. Never forget: that applies to people also, and for the same reason.

We also see a natural hierarchy of rights. We see the tree taking sunlight from other plants and taking up nutrients that they could have had. So in nature, higher life forms have superior rights that allow them to infringe the rights of lower forms. It is an interesting insight to realize that by examining rights alone, we can determine what forms of life are superior. The so-called food chain is really a rights chain and seeing it that way is an insight into the nature of the universe around us. We could also call it an authority chain. 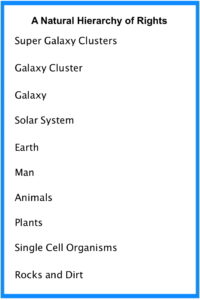 The sidebar, “A Natural Hierarchy of Rights” illustrates one way of seeing this hierarchy. The most powerful powers (rights) belong to the superclusters taken as a whole, etc. Each level has power over every level below it. Of course, there are many ways of looking at this so my little sidebar may not please everyone. But it does illustrate the fact that we are in the middle of it all. No matter who we are, how smart we are, there will always be someone smarter and that goes for all our characteristics.

By focusing on rights alone, we can clarify complicated relationships. We find this true in the world around us and between us humans. This insight will become very useful when we look at the relationship between church and state.

I like to use the beaver example because he cuts down trees, and has considerable environmental impact. I have to smile when I remember how he keeps nullifying the National Environmental Policy Act (NEPA) with his dams and logging operations.  Beaver rights include harvesting rocks and trees, building beaver dams and lodges, traveling, courting, and producing a family. He also has the right to protect himself, his family and his property, even by use of violence when needed. These are second amendment rights, and the beaver demonstrates why that amendment exists. There is a more thorough discussion of beaver rights here.

If we use the standard, “If he can do it he has the right to do it,” it is clear that humans hold the top level in the hierarchy of natural rights among earth’s life forms. These rights are sometimes expressed in human ownership of the lower forms, or in other words, human property rights include ownership of the lesser forms.

What is not so clear, is whether a more capable human has rights superior to less capable people. The answer is “he does,” because that is in harmony with the nature of things. We see it all around us, smarter people can do more and usually earn a higher wage because of it. That is natural and should arouse no more ire than the fact that smart beavers cut down dumb trees.

Now if that didn’t bother you, you are asleep. This is where superior rights run up against the idea of “equal under the law”. So let’s look carefully at this.

I have already pointed out that the sun shines on everyone and that makes us equal under that law of nature. The same is true for gravity, and a bunch of other things. That fact gives nature a legitimate authority over us because it treats us all the same and does so consistently. These powers of nature are also superior rights. From this, we get the idea of how a legitimate government should function. Government has superior authority (in some things) and must treat all citizens equal in order to be legitimate. To whatever degree the government fails to treat citizens equally, to that degree it is a dictatorship.

But there is this troubling thing found in some people who think that because they are smarter, they should have power (superior rights) over others. That could happen to a guy named Mr. Smart. It is undeniable that Mr. Smart has rights and powers superior to his neighbors. That’s the natural order of things and as we watch him we can see that he can do more. According to our definition of rights — if it can do it has the right to do it — he has superior rights. That concept applies to all the things, Mr. Smart included. However —

We are talking about two different realms here and now is the time to make that very clear. There is the physical realm where we find natural rights, and there is a political or governmental realm. Mr. Smart has superior rights in the natural realm but not in the political one. Man constructs the political realm so it is artificial: made by man’s artifice. It is not on par with our natural rights.

It is a normal thing for Mr. Smart to think he has superior political rights because he already knows he has superior natural rights. But that is faulty logic at best, and selfish ambition at worst. If Mr. Smart tries to “lord it over” his neighbor, he is abusing his freedom, acting like a dictator, and being a jerk (just to make that clear). Slavery is a form of this that goes so far as to declare that one human can own, or have property rights, in another human.

Most of our laws are an attempt to frighten Mr. Smart into being a good neighbor. But we muddle things up if we forget that natural rights and political rights are in two different realms, and a lot of our political differences begin with this muddling. Church and state issues are prime examples as we will see.

The Separation of Rights and Government

The founding fathers based our government on the single idea that “inalienable rights” exist, with or without government. The object of the Constitution is to protect those rights. It is a dangerous misunderstanding to think that the Constitution gives us rights. I always cringe when I hear someone say, “The Constitution gives me the right to …”. If a law can grant rights, it can take them away. (Now  laws do exist that grant authority or rights, but those are not fundamental, natural, inalienable rights.)

Here’s another way to see this separation. The legal/government universe has no direct physical power. It cannot, of itself, affect anything in the physical world. To bring about change, it confiscates physical assets and uses them. That’s why we pay taxes that buy goods and services. This proves that the government has no inherent rights like citizens do.

Another insight to write down: notice that since we delegated rights to this wonderful institution (that made our nation the world’s beacon of hope and freedom for over two centuries) we can withdraw that delegation. The Constitution provides several ways to make changes we, the people, want to make. But we have rights beyond that. We just hope that will never be necessary.

Justice demands that every citizen be equal under the law. That’s because legitimate authority must treat everyone the same. That was pretty simple.

Now, as we leave the lesser life forms cavern, we need to remember that natural rights give some people more power to do things than others. But that happens in a realm separate from the political or government realm where we all must be equal. 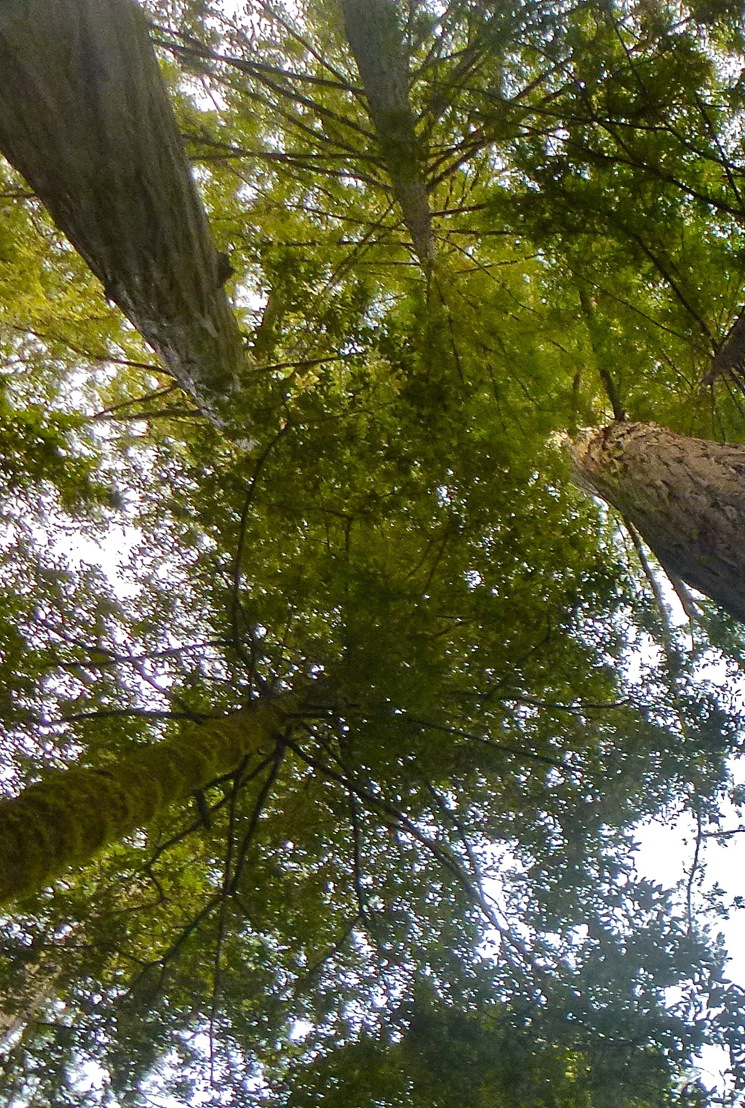