The two worst topics to bring up if you want to keep your friends are religion and politics: the other labels for church and state. Not only that, this book is about rights: “I have a right to …”, “He has no right to …”, etc. So here we talk about three big issues: rights, religion, and politics and the fog they create in our culture that has us crashing into one another. It would seem that such a book would be complicated and hard to read, but looking at church and state through the lens of rights dispels the fog as if by magic. It’s the right tool for the job. [edsanimate_start entry_animation_type= “” entry_delay= “” entry_duration= “” entry_timing= “” exit_animation_type= “slideOutRight” exit_delay= “0” exit_duration= “4” exit_timing= “linear” animation_repeat= “1” keep= “yes” animate_on= “hover” scroll_offset= “” custom_css_class= “display-left-inline”]

What This Book Is Not

The book is not a scholarly approach to church and state from a legal, policy, or historical viewpoint. However, it does use current church and state controversies as examples, when those topics come up. It is not a book with a political agenda, although given that many people are primarily driven by their political agenda, they will surely read one into this book. When you buy a blue car, you suddenly see thousands of them. When you are a racist, everything is racist.

What This Book Is

Because this book deals with the issues of church and state from a human rights viewpoint, it is filled with timeless insights. Natural human rights are at the dead center of all political controversies, of all legal conflict, of all revolutions, of all wars, and of most marital problems. Think about that and you’ll get your first insight of the many in this book.

This is a handbook where you learn the principles underlying the church and state conflict. And, because it is rock bottom basic, it guides you to an understanding of current and future issues. Here simple logic will take the mysticism out of rights.

It begins with an introduction to natural human rights that provides a unique perspective on church and state. You also learn an undeniable basis for human rights without an appeal to deity. That fact helps defuse disagreements.

This book deals with things that make people angry and upset, which is one of the main reasons for the book. It points out a path to bring order out of chaos by laying out the hard facts of our physical world and then shows how those facts produce a simple viewpoint. That point of view makes it easy to understand what these controversies are actually about. And, of course, understanding the problem is eighty percent of the solution.

It should not surprise us to find that the excitement and euphoria that came with the adoption of the Declaration of Independence and the new Constitution, that we have gone too far. The pendulum has swung completely away from a religious state to an anti-religious state. Nor should it surprise us that the blunt force tool needed to initially effect that change is now too crude an instrument to bring in the next, more equitable phase.  We need a tool with a finer blade to separate religion and state now, one that permits all believers (and we are all believers) freedom of conscience and practice. 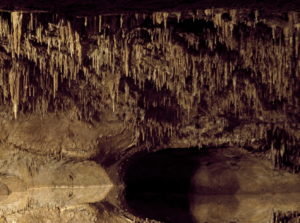 A Spelunking Adventure in the Cave of Natural Rights

This will be an exciting adventure as you learn the absolute bottom basics of human rights and how they connect with the issues of church and state.

But I want to warn you right up front that if you are looking for reasons to keep the opinion you already have about church and state, you might be reading the wrong book.

If you have the nerve to test new ways of thinking, then you will enjoy this adventure in thought, this insightful exploration of the cave where human rights are born and where the roots of the church and state controversy dangle from the ceiling in plain sight.Click To Tweet 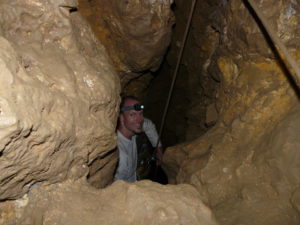 As you put on your headlamp and enter the cave, you will notice that the bright lights of popular contention have blinded you to what’s really going on. As a people, we have talked religion and law (church and state) in a superficial way, and we have missed the real issues behind the visible conflicts.

So get comfortable, have your emergency food ready at hand, grab your flashlight, and we’ll take a walk in the physical world of natural rights.

I want to thank my father who loved honor, work and truth above all else; who taught me to look for answers instead of excuses and gave me a name to honor and build.

And I want to thank all the teachers whose hours of toil and service left their marks on my soul and showed me the value of hard work and the reward of careful thought.

I want to thank all the heroes of the great American experiment whose blood washed out the evils of selfish and conspiring men. From the least to the greatest of them, their sacrifice shall not have been in vain so long as I have breath to thank them.

And the most important person: I want to thank my beloved eternal companion whose patience and encouragement have filled my life with inexpressible joy. She is the best thing that ever happened to me. And besides that, she spent many hours proof reading, reviewing, critiquing, advising, and discussing my sometimes obtuse viewpoints on things. She is actually a co-author.

And then I want to thank myself for sticking with it and having the strange viewpoint of the physicist. The physicist has a fixation on a goal of boiling complexity down to the simplest possible statement. He is always looking for that unification theory that describes the entire physical universe in a simple sentence, or better yet, a short equation. He loves to end long explanations with a short mathematical notation such as Einstein’s famous equation: E = mc2. I once had an engineering professor who loved to bash the social sciences with statements like “If you can’t put a number on it, you don’t really know what you are talking about.” While there is much truth in that, the human race has yet to learn how to put numbers on vital abstractions like equality, justice, and love.

Finally, this book would never had happened if I had not had the experience of a repeated impression that could only be verbalized with “Write a book on church and state.” During the last few months of a volunteered church mission, this feeling kept creeping into my mind and each time my desire and duty grew. If the work slowed or I choose other activities the duty feeling would pester me until I got back to work. The reason God wanted a physicist to write a book on church and state was, I think, because I had no prior training in law I would be forced apply my gift for deep analysis in order to discover and understand the issues.

The natural rights triad of rocks, trees and beavers was a direct answer to a prayer that God would show me an indisputable basis for rights without any reference to him so that unbelievers would be forced to consider the inherent, inalienability, and immutability of natural human rights.

Why Am I Doing This Blog?

2 thoughts on “The Introduction to the Book”