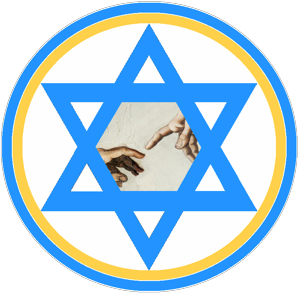 The Symbols of the Logo

The logo is symbolic of the most important facets of our existence: from the inside out –

One cannot hope to repair a broken device without knowing what it was designed to be and what it is supposed to do. Likewise he cannot hope to find harmony and happiness in the world unless he knows what and who he is.  The logo represents what we are and our potential future.

Our origin tells us what we need to know about who and what we are: literal offspring of that super-intelligent alien we call God or Heavenly Father. That is represented with the hand of the Father touching the hand of Adam at the point of his coming to life. This is from Michelangelo’s painting on the ceiling of the Sistine Chapel.

The gold circle represents the glory of God which he has covenanted to share equally with each of his obedient children.

The blue circle represents the the destiny of mankind to rule in the heavens having been given the glory of the Father by the grace of his Beloved Son to sit down in his throne eternally.